Aedes SIIQ was created following the demerger of the pre-existing Aedes (now called Restart), founded in 1905 and listed on the Italian Stock Exchange since 1924. Aedes SIIQ, following the demerger – approved in the Shareholders’ Meeting of September 27, 2018 – and simultaneous listing on the MTA market (now called Euronext Milan) managed by Borsa Italiana in December 2018, owns a real estate rent portfolio and development for rent portfolio in line with the strategy of a REIT with commercial purpose (Retail and Office).

Aedes SIIQ’s strategy consists of the creation and expansion of its “Commercial Portfolio”, with a particular focus on new-generation “Retail Properties” and high-quality “Office Spaces” exceeding the industry average, in order to generate recurring cash flows in line with the SIIQ/REIT model.

The recurring cash flow will derive both from the properties already owned, with retail and office use, currently leased or in the marketing phase, and from the areas that will be developed in-house to realize rental properties primarily for retail purposes.

Aedes SIIQ is building its future thanks to the investments of its two business lines, acquiring income properties to compete with the performances of European REITs and, on the other, creating a new generation of shopping and leisure centers through its pipeline development, with a limited recourse to both indebtedness and financial risk assumptions.

Below is a list of the Shareholders who hold a stake of more than 5% (taking into account the Issuer’s qualification as a SME pursuant to Article 1, paragraph 1, letter w-quater. 1, of the TUF and termination of the temporary regime of enhanced transparency provided for by Consob resolutions n.21326 and 21327 of April 9, 2020, as subsequently extended until April 13, 2021) resulting from the Consob communications received pursuant to art. 120 of the TUF, as well as other information available to the Company. 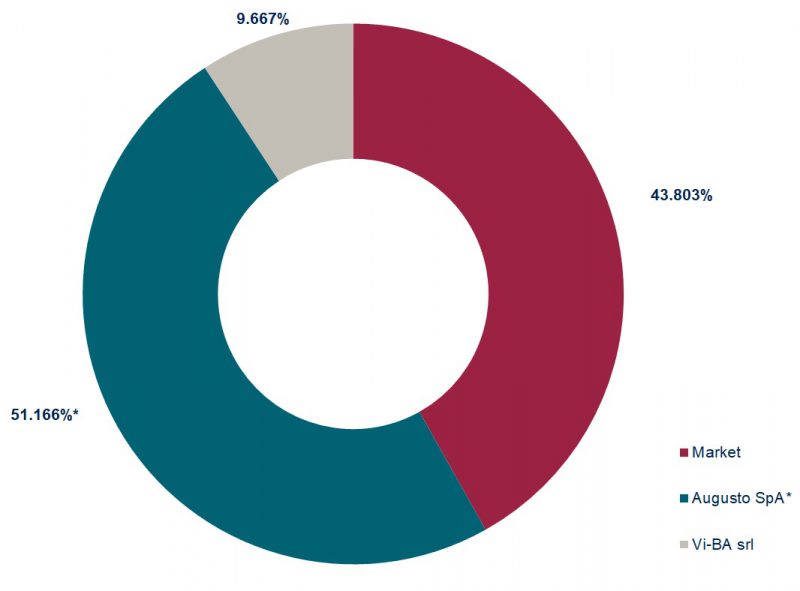 On November 26, 2021, the shareholder Augusto S.p.A. in liquidation, in the context of the update of the communication pursuant to art. 120 TUF, following the conversion by Augusto of no. 23,000,000 special shares in ordinary shares, confirmed to Aedes SIIQ that it is the legitimate owner of a further n. 5,020,618 Aedes ordinary shares, equal to 1.9064% of the share capital consisting of Aedes ordinary shares (a total of 263,355,730), deposited on April 18, 2017 as collateral to the issue and subscription of the 2017 Bond Loan not returned to expiry of the Loan, which is why Augusto SpA has pleaded a serious default and has not repaid the aforementioned loan. In the course of the proceedings initiated by Augusto, unlawful acts of disposition emerged with respect to these actions, of a nature and in favor of recipients yet to be ascertained, apparently implemented in England. In particular, Augusto is not yet able to know whether the aforementioned Aedes shares are deposited on other accounts in any case attributable to the depositary or whether they have been, in whole or in part, sold to subjects connected to the depositary or definitively sold to third parties in good faith. . Augustus also started legal investigations in England to be aware of what really happened. To date, Augusto is unable to exercise the rights relating to the aforementioned n. 5,020,618 Aedes ordinary shares, nor was it able to exercise the related option rights on the occasion of the Aedes share capital increase resolved on February 15, 2021 by the Aedes Board of Directors and concluded on April 12, 2021 and the described state of serious uncertainty remains regarding the recoverability of the availability of the same. In the event of effective recovery of the availability of these shares, Augusto would recover the ability to fully exercise the rights relating to his participation, without this resulting in an obligation to promote the takeover bid.